Home Cathedral The Side Chapel

Each of the four side chapels has a special sacramental function so that they relate as a group to the centre, the place of the Eucharist.

The Chapel of the Blessed Sacrament

The chapel of the Blessed Sacrament to the right of the centre, is fully visible from the south aisle of the Cathedral. the tabernacle, made of silver-plated sheet bronze and mounted on a granite pillar, has the form of a tent, the symbolic dwelling-place of God in the Old Testament. 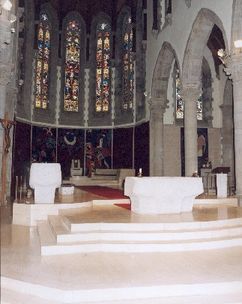 This ‘tent’ is encircled by a boldly modelled motif in gold-plated cast bronze which represents the continuous river of life, and can also be read as the letters of the words SOLAS DÉ, the light of God.

The sanctuary lamp, symbolising the living presence of the Holy Spirit and nestling in a mounting also made of gilded cast bronze, stands on top of the tabernacle.

Fixed to the supporting pillar for the ciboria to rest on is a bracket of the same metal. This is pierced with a pattern of small crosses which is normally invisible because the bracket is seen edgeways, but in certain lights it is projected in shadow form on to the face of the stone, a happy inspiration on the part of Richard Enda King, who designed and made the tabernacle.

The baptistery, to the left of the centre, relates easily to the ambo, the place of the Word. The font has a large, shallow circular bowl, always kept full, cut into the flat top of the stone. This top surface has the form of a square with rounded corners; the diameter of the bowl is related, through a hidden geometry, both to the curvature of the corners and to the dimensions of the square. Traditionally, fonts are octagonal in form. Here, the octagon is present, though hardly perceptible. Only the plan would reveal it, through two squares, one superimposed on the other at forty five degrees. 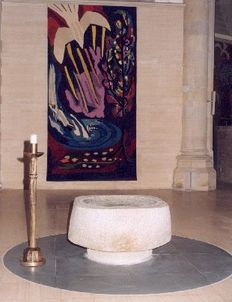 The font stands in a circle of dark-green slate set into the marble floor, suggesting, by its form and colour, a surrounding pool.

The Chapel of Reconciliation

The chapel of Reconciliation, to the right of the chapel of the Blessed Sacrament, houses a confessional whose circular shape may call to mind the beehive cells of an ancient Irish monastery. The wall, consisting of forty-seven unpolished marble slabs, cut to shape by hand, tapers slightly upwards: a challenging task for the stonemason and executed with remarkable precision. An anchor, symbol of Christian hope, is carved over the door, to each side of which is an inscription in raised letters, a Gaelic rendering of Mark 6:50-51:

(Jesus said to them:
It is I. Do not be afraid.
Then he got into the boat with
them,
and the wind dropped.)

The Chapel of the Holy Oils

The chapel of the Holy Oils is to the left of the baptistery. The aumbry, a recess in the back wall formed in a marble surround, contains the three pewter jars for the Oil of Catechumens, the Oil of the Sick and the Sacred Chrism. The jars themselves, whose maker is unknown, are a notable ornament of the Cathedral. The aumbry, like the font and the confessional, was designed by Michael Biggs; the miniature bronze gates were executed by Martin Leonard. 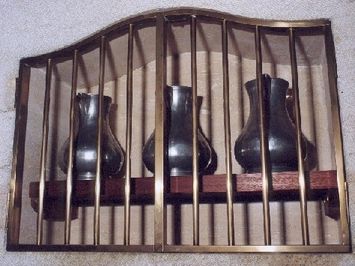