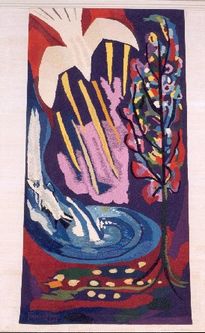 There are three themes in the Baptism Tapestry:

(a) A dove sending seven shafts of light into a pool of moving water, symbols of the Holy Spirit, his seven gifts and the life-giving character of Christian Baptism.

(b) A salmon leaping against a waterfall (on the left) expressing the struggle of the Christian life. This symbol is inspired by the falls of Assaroe where the Erne meets the Atlantic at the western extermity of the diocese of Clogher.

(c) A richly-coloured tree, rising from seeds and roots, symbol of the spiritual life of the Christian, evergrowing in grace, strength and beauty. The tree is suggestive of the literal meaning of Macartan ‘devotee of the rowan tree’.

This is about the sacred action of Word and Eucharist. It describes several incidents from the life of St Macartan as related in the medieval accounts of the saint which survive in Irish and Latin. They are chosen here to describe the central aspects of the bishop’s ministry in presiding over the liturgy of the local Church. (The story reads upwards from the lower left corner.) 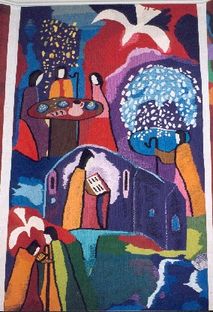 (a) Macartan (in orange cloak throughout) receiving the symbols of his episcopal office from St Patrick. The symbols are the bishop’s staff or crozier and the Domhnach Airgid.

(b) The ford across the river (lower right) denoting Macartan’s previous role as tréanfear Phadráig. As Patrick’s strong man he used to carry him over rivers, fords and bogs.

(c) Macartan leaving the ford behind him and setting out, staff in hand, to found his new church in Clogher.

(d) Macartan reading his Bible inside his church (centre) and surrounded by a miraculous haze of light. The light is the gift of personal faith which empowers the bishop to read and preach the Word of God with a new and totally different kind of vision.

(e) Macartan and his two guests (upper left) seated at table. The bread for the meal is obtained from a miraculous shower of corn over the table, while the gushing fountain (upper right) produces water that tastes like wine. The meal is the Eucharist, the celebration of God’s unending hospitality. 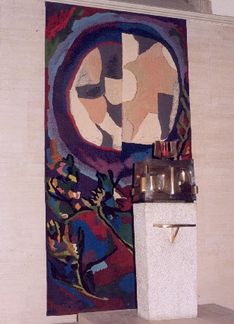 This is about the communion of prayer and contemplation which is the fruit of the Eucharist. It is expressed here by means of a large broken host resting on a cluster of vine leaves and branches.

The broken host emphasises the humanity of Jesus in the tabernacle and his suffering and death on our behalf are the source of our Christian hope. the host is inset in an unbroken circle, symbolising the divinity of Christ which remains unchanged by the brokeness of his humanity. The vine is a symbol of the unity which exists between Christ and his followers.