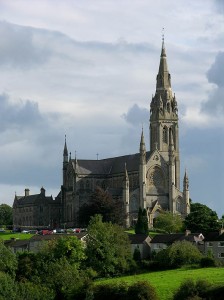 I welcome the young people present who are to be Confirmed this year.  I welcome their teachers who have guided them to this significant staging post in their life’s journey, I welcome those present who care for the sick and the ageing, I welcome parishioners from Monaghan and those who have come to join us from other parts of our diocese.  I welcome especially my fellow-priests who, during this Mass will renew their priestly promises.  Today the Oil of the Sick and the Oil of Catechumens will be blessed and the Chrism consecrated.  They are symbols of the service of our priests to their people in caring for the sick and in leading their flock towards God on their journey through life.  You are requested, members of the faithful, to pray for your priests and to assist them in discharging their responsibilities in whatever way you can.

To prepare ourselves to celebrate this Mass more worthwhile
let us ask pardon for our sins.

As you can see, in today’s Chrism Mass there is a special focus on priesthood.  The priests of the diocese concelebrate with their Bishop, and in so doing express their communion with one another.  Each has his own life, his own responsibility, his own gifts.  Collectively they work together, support one another and care for the same flock.

Referring to priests, the Preface of today’s Mass says that, “Christ chooses men to become sharers in his sacred ministry.” “They are to lead your holy people in charity, to nourish them with the word and strengthen them with the Sacraments.”  “As they give up their lives for you and for the salvation of their brothers and sisters, they strive to be conformed to the image of Christ himself and offer you a constant witness of faith and love.”  A few sentences say a lot about what priesthood is meant to be.

Recently, I was reading an account of the life of an Irish priest called John Sullivan.  He was born in Dublin of Cork parents in 1861.  One of his biographers complained that he had very little material for him to work on.  John Sullivan did not leave much writing after him.  His sermons and talks were largely taken from the writers he read.  When he delivered his homilies people said they carried so much of his own personal sincerity that they were intensely persuasive.

John Sullivan was educated in Portora Royal School in Enniskillen for six years.  His father was a Protestant and John himself was brought up in his father’s tradition.  It was a surprise to his friends, when at the age of 35, he was received into the Catholic Church at Farm Street Jesuit Church in London, and an even bigger surprise when he joined the Jesuits as a novice four years later.  His friends at the time described him as genial, kind and humble.  He had a gentle sense of humour and a genuine empathy for those in difficulty.

He was ordained a priest at the age of 46 in 1907 and appointed to the teaching staff of Clongowes Wood College in Co. Kildare.  One of his biographers says, “He appears not to have been a good teacher, lacking the ability or perhaps the will to exercise the necessary discipline to direct a class of energetic youths.”  A failure then?  One of his students wrote, “He was and is for me the embodiment of an ideal of Christ-like kindliness and other worldliness, the like of which I do not expect to meet again.”  It is not surprising then that he was appointed a spiritual director to the students.

We are told the boys respected him for his honesty, his hard work and his care for them.  They liked his sense of humour, looked for his advice and enjoyed talking to him.  He was much sought after for Confession.  He lived frugally, dressed shabbily and spent much time at prayer.  He was not a great speaker.   Tense and nervous, his voice sombre with no variation of pitch, his style was awkward.  Still people listened to him intently and they heeded what he said often commenting that, like Christ, his words seemed to come with authority.

In a few minutes the priests assembled here will renew the promises of their ordination.  They will declare again their resolve to be “faithful stewards of the mysteries of God – not seeking any gain, but moved only by zeal for souls.” They will promise “to be more united with the Lord Jesus and more closely conformed to him.”  All of this is meant to be done with conviction, with generosity of spirit and in humility.

Many of God’s choices as leaders and prophets in Old Testament times pulled back when they were called.  They claimed they were not worthy and could not do it.  They were reassured and told to get on with it.  They were promised the support of the presence of the Spirit and God’s guidance.  Fr. John Sullivan would hardly be the subject of a television documentary.  His sermon material was borrowed from others, he seemed to be a failure as a teacher, and his voice and nervous disposition made him hard to listen to.  Yet we are told that in his care for people, his personal sincerity, his kindness and humility, he witnessed the authoritative teaching and the love of Christ to so many.

It all serves to remind us once again that we are the imperfect human vessels and Christ is the life.  If we forget and neglect that, we become empty vessels.  That is why you the faithful are asked to “pray for your Priests, that the Lord may pour out his gifts abundantly upon them,” and to pray for your bishop that he “may be made day by day a living and more perfect image of Christ, the Priest, the Good Shepherd, the Teacher and the Servant of all.”

“The Spirit of the Lord has been given to me, for he has anointed me.”  It is at the same time challenging and reassuring, not only to silver and golden jubilarians but also to the young, with all their energy and their talents still to be focused, as they consider the Lord’s invitation to serve their people in offering them the possibility of a fuller life.  We are privileged to be offered a priceless pearl, to cherish, maintain and share with others along with as much help and support as we need to discharge our responsibilities and enable the light of the pearl to shine for all.

This week’s worship relives the journey of Jesus Christ and points the way in showing us where it all leads and where it all comes to life.  The renewal of Priestly Promises closes on “May the Lord keep us all in his charity and lead all of us, shepherds and flocks, to eternal life. Amen.”