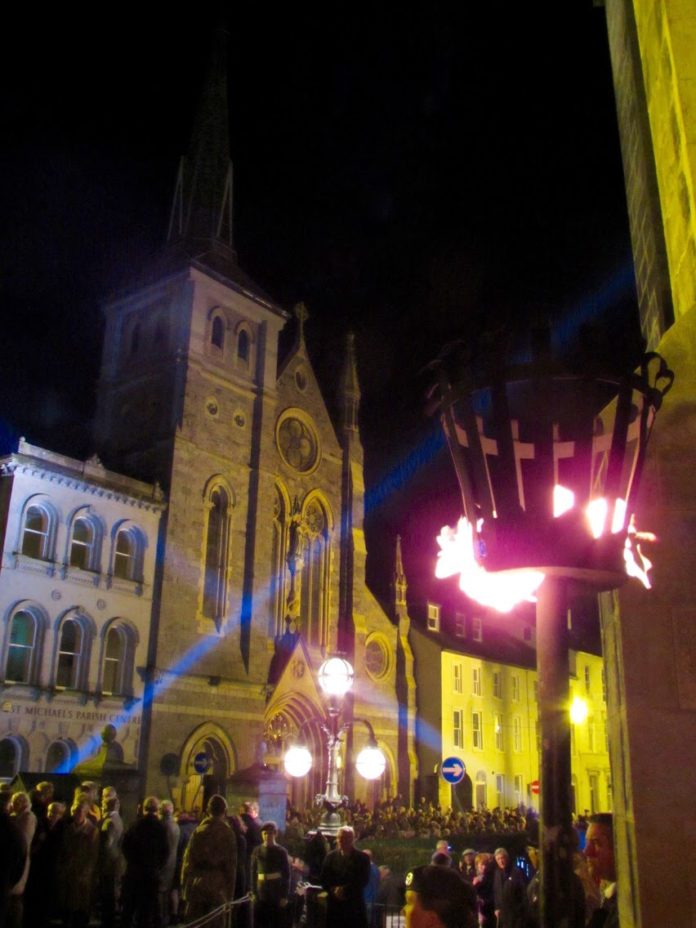 HOMILY BY MONSIGNOR PETER O’REILLY. PP ENNISKILLEN AND ARCHDEACON OF CLOGHER, AT THE CELEBRATION OF THE LITURGY OF EVENING PRAYER IN ST MICHAEL’S CHURCH, ENNISKILLE, ON SUNDAY 11 NOVEMBER 2018, MARKING THE CENTENARY OF THE ARMISTICE WHICH BROUGHT WORLD WAR I TO AN END.

There was a huge attendance at the liturgy. After welcoming Queen Elizabeth’s Lord Lieutenant for Fermanagh, Viscount Alan Brookeborough, together with his wife Lady Brookeborough, Mgr O’Reilly also welcomed the representatives of the Polish, British and United States governments, together with other dignitaries who were present, He referred to the Service held in Enniskillen Cathedral back in 2014 to mark the beginning of the First World War. At the end of that service, the lights in the Cathedral were extinguished; all but one flame – which was represented in St Michael’s Church this evening. During the service, in which the local ministers of the Church of Ireland, Methodist and Presbyterian Churches participated, the light from the single flame was shared to evoke a sense a return of peace. Following the service, the flame was carried back across the street to St Macartin’s Cathedral and from it was lit a beacon to commemorate the end of the War.

‘Each of us has an intention in our hearts that brings us here. Our intentions come in large part from who we are, from our identity. Identity isn’t just about habits, appearances, activities past and present. Identity is also about who we want to be: goals, hopes, dreams & aspirations. So what brings us here this evening is about our identity too. We are here not only because of who we are; we are also here because of who we want to be.

‘Of course, the people we remember today: what impelled them, what brought them to their moment – that was identity too. They didn’t just have one single identity. They were sons, they were husbands, they were brothers; they were poets, farmers, shipwrights, even schoolboys; they were from particular places (and in this island place is very important); they had been born into a range of traditions.

‘If I were hazarding a guess at what that identity – what that light – might have been, I would name two things: a sense of God – the love and service that is God’s due; and a sense of decent humanity – the love and service of neighbour. Whatever we might say about how their moment arrived, we can say that many of them felt judged by that moment and they were not prepared to let themselves be found themselves wanting. At root, I believe that many of them had a sense of owing an account of themselves to God and to neighbour. And so they signed up.

‘They lived their moment – they let their light shine – so that we could live our moment, this moment – so that we could let our light shine. They wanted us to have a future where we could be ourselves – each of us just as who we are – not having to edit ourselves to fit someone else’s idea of who we should be. They had a sense of community and a sense of duty that was greater than any single part of their identity.

‘Now we are in this moment, the moment for which they sacrificed, and we know that how we live this moment will, in turn, determine how future generations live theirs. Like the brave soldiers we commemorate, we have a mix of identities too. And like those whose memory we celebrate that identity is a balance, a mix, of things. Like all balances, they need a turning point, a fulcrum. What is it that can hold all the aspects of our identity in balance? For many of them, they had grown up in a Christian Culture based on the words of Jesus: This is my body given up for you; do this in memory of me.

‘It’s not entirely surprising that this was the fulcrum, the point of self-giving service, around which their sense of identity balanced. That point of balance is a point of light, a light that shone in some terrible darkness. The light of glory is a difficult thing: but it shines most brightly in suffering, in darkness. It shone most brightly on the Cross of Christ.