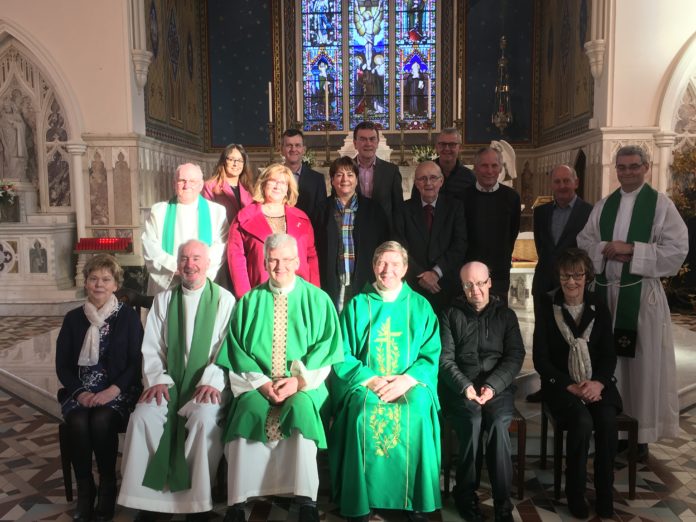 On Sunday last the people of the parish of Muckno celebrated the installation of a new Parish Priest, as Canon Shane McCaughey was installed in the role by the Diocesan Administrator of the Diocese of Clogher, Mgr Joseph McGuinness. The rite of induction took place during the 11.30am Sunday Mass in St Mary’s church, which was packed to capacity.

Canon McCaughey is a native of Trillick, Co Tyrone and members of his family were present in Castleblayney for the event. Canon McCaughey was ordained to the Priesthood in 1989 and has served in the parishes of Donagh, Tydavnet and Aughnamullen East. He has also been President of St Macartan’s College since 1993 and has assumed the role of Diocesan Secretary and Chancellor since the retirement of Bishop Liam MacDaid in 2016. In addition to his responsibilities in the Parish of Muckno and at diocesan level, he is also the Administrator of the Parish of Aughnamullen East.

Preaching at the Mass last Sunday, Mgr McGuinness commended the ‘selfless and generous service’ that Canon McCaughey has given in other parishes and to the diocese. He said that both Canon McCaughey and Fr Stephen Duffy, the other new priest in the parish, were blessed by the welcome they had received in Muckno. He was confident that Canon Shane would be a model of Jesus Christ, ‘the faithful shepherd, knowing his people, guarding them and providing for all their pastoral and sacramental needs’.

Monsignor McGuinness went on: ‘The mission which Canon Shane and Fr Stephen are embarking on in this parish is not, of course, theirs alone. I know that here in Muckno, there are many among you who give very generously in service to the parish and provide a wide variety of ministries and support to this community. You will all know that given the diminishing number of priests in our diocese, this voluntary ministry of lay people has never been more needed and will be even more so in the years ahead. I hope and pray that many more of our laity will respond to their baptismal calling to serve God’s people in ministry in the church. God has given each one of us valuable gifts, not the least of which is time. Perhaps a little of that time might be given back to him in serving his people.’, he said.

Mgr McGuinness also asked people to pray for more vocations and to be positive in supporting those discerning a vocation to the priesthood or religious life. ‘When a vocation dies, it is often for want of encouragement, or the result of ridicule or negativity’, adding that Muckno has had many great priests and ‘two wonderful priests today’. He said that if that is to be case into the future, it will be because ‘our homes, our families, and our parishes really value and encourage vocations’.

At the end of the Mass, Mgr McGuinness announced that Pope Francis has bestowed the Papal Medal “Bene Merenti” on the Parish Sacristan and popular local man, Michael Murphy, in recognition of his more than thirty years distinguished service to the parish and to the wider Church. The medal will be presented to him by Mgr McGuinness at the 6pm Vigil Mass on Saturday 1 December in St Mary’s Church, Castleblayney. Michael becomes only the second person in the long history of the Parish of Muckno to have received such an award, the other being the late Sr Ursula Traynor, former organist at St Mary’s, who was awarded the “Bene Merenti” in the Jubilee Year 2000.