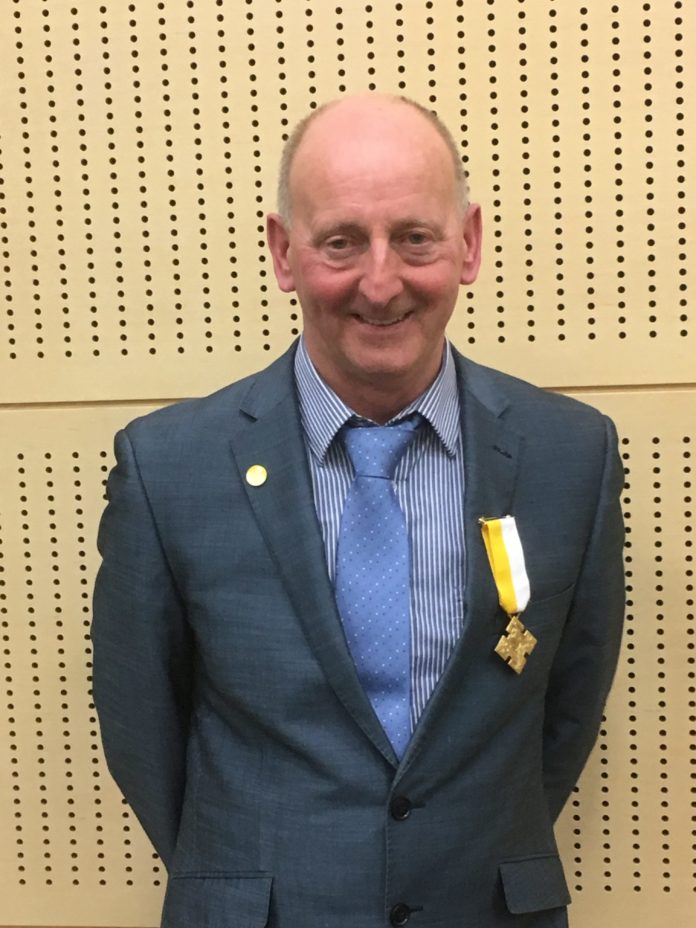 On behalf of Pope Francis, the Diocesan Administrator Monsignor Joseph McGuinness has conferred the medal and honour Benemerenti on the Parish Sacristan in Muckno, Michael Murphy. The Rite of Investiture took place at St Mary’s Church, Castleblayney during the Vigil Mass for the First Sunday of Advent on Saturday 1 December 2018. It was the second time that the community had gathered in the church that day, the first being for the funeral Mass for the assistant sacristan, Stephen Marron RIP, who died following an incident on Main Street in the town on Tuesday night last. Stephen and his family were very much included in the prayers of all those gathered. Mgr McGuinness was joined in concelebrating the Mass by the priests of the Parish of Muckno, Canon Shane McCaughey PP and Fr Stephen Duffy CC, as well as others who have served in or are natives of Muckno: Canon Pat McHugh, Fr Leo Creelman, Fr Owen Gorman, Mgr Larry Duffy, Fr Michael Daly, Fr Jerry White and Fr Seamus Whelan.
In his homily at the Mass, Mgr McGuinness referred to Advent as the season of waiting, a period of personal and communal reflection on the coming of the Lord. He contrasted the Christian understanding of this time of year with that held and practiced by many in today’s world:

For us, what’s important is in here – in our hearts and in our community of faith, hope and love. This couldn’t have been shown more clearly than this morning in this church, when the grief of a family and a community was made bearable by the loving support of a people united in faith. In dark days we need to let that light that is inside us shine. We know that the dark days of winter will pass, that light and warmth will come again, just as we know that the light of Christ and our faith in him will overcome all the darknesses of our lives. But we have to wait.

These next few weeks can easily become a time of stress, often because of the demands we feel are put upon us materially, financially and emotionally. Let’s use the Season of Advent and its message of hope to help ourselves to take a little step back from all of this; to put things in perspective, and to find a way of approaching the Christmas celebration in calmness, patience and peace. Let us make time especially for prayer, at home and here in church. Let us pray for the gifts that truly matter, and for the generosity to share those gifts with those around us who really need them, family, friend and stranger. In the words of St Paul: “May the Lord be generous in increasing your love and make you love one another and the whole human race as much as we love you”.
There are only 23 praying days left ‘til Christmas – if we use them well, then our Christmas celebration will have been well worth waiting for.

Just before the Rite of Investiture, Mgr McGuinness referred to the role of servant that each of us is called to. He said that Michael Murphy, popularly known as Mickey, is a very worthy recipient of the medal because he is a friend to all, a person who held his hand out to everyone in the community, often speaking the peace that people longed to hear. His devotion to the role of sacristan is rooted in faith and in the good training he received from his late father, Pat Murphy.

Following the Mass, parishioners gathered in the new Sports Hall of Castleblayney College where, following refreshments, there were tributes paid to Mickey by Mgr Larry Duffy and Canon Shane McCaughey, as well as by the master of ceremonies for the evening Raymond McHugh. In a very reflective and well-delivered speech, Mickey recalled his path to the post of sacristan, the huge influence of his father, his mother and brothers, the support he gets from his co-workers and the joy he gets from working with the various priests – especially in telling them what to do!

Mickey succeeded his father Pat as sacristan at St Mary’s Church in 1986. Pat had been sacristan from 1963. In 2010 he was also appointed to take charge of St Patrick’ Church in Oram, as Parish Sacristan. But Mickey’s contribution has been about much more than the role of sacristan. He goes way beyond the call of duty in his care for and love of the priests and people of the parish and the wider community. His devotion to duty is a great witness to the joy of the Gospel in our midst. The award of the Benemerenti medal is a recognition by Pope Francis of the outstanding contribution that Mickey and his family have made, and continue to make, to the parish and to the wider church.

All of us across the diocese congratulate Mickey and wish him many more years of faithful and fruitful service among us in this part of the Lord’s vineyard. He becomes only the second person in the long history of the Parish of Muckno to receive this Papal Award, the other being our late Organist, Sr Ursula Traynor who was awarded the medal in the Jubilee Year 2000. Congratulations Mickey!