The Parish of Aughnamullen East is situated in mid-County Monaghan. It is a rural parish surrounding Lough Egish lake and lying between the towns of Castleblayney and Ballybay, with Carrickmacross to the south and Shercock to the west. The terrain of the parish is hilly, with some notable drumlins.

Until the early 1800s, together with Latton and Bawn, it formed part of the ancient parish of Aughnamullen. In fact, prior to 1530, it formed part of much wider parish called Cremorne, a territory which included the parishes of Tullycorbet, Clontibret and parts of modern-day Muckno. During the 17th century, thanks to the patronage of the Colla MacMahon family, the dispersed Franciscan friars from Monaghan town exercised their ministry secretly in this parish and established a friary at Templemoyle on the eastern shore of Lough Egish. Friars continued to exercise ministry in this and the adjoining parish of Donaghmoyne until at least the late 18th century. The first post-penal era church in the parish, at Aghmakerr, was constructed in the mid-1700s and was succeeded by the present one in 1893. The church at Carrickatee, reputed to be the highest above sea level in the diocese, dates from 1896, replacing an earlier one which dated from the late 1700s or early 1800s.

Today the Parish of Aughnamullen East has 450 Catholic families and a population of approximately 1,300.

Saint Associated with the Parish:

The local saint is St Cera, a contemporary of St Macartan and St Tiarnach. She is also associated with the Parish of Latton and the Parish of Donaghmoyne. Her feastday is on 9th September. 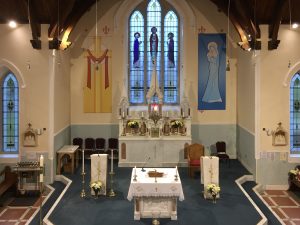